We’re getting closer and closer to have a test build ready.  Here’s some of what I’ve been working on this month.

So last update I talked about the new character models.  This month was about getting them in game.  I wasn’t able to complete that process entirely, but we do have them rendering in game with the appropriate shadows/coloring.  The last issue to resolve is to get them animating properly per player input.  I was hoping to have this done already, but I’ve hit a snag with the system I’m using (Mixamo) that’s preventing me from getting all of the test animations I need.  Hopefully the issue will be resolved and I can get them in soon.  Note these will be test animations only, they will not be final.

In the screenshot below you can see one of the characters in game. 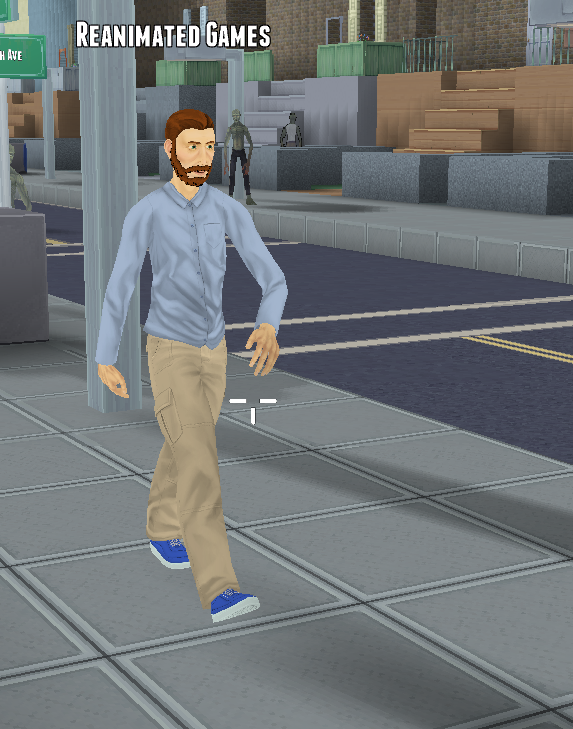 So the above screenshot was made possible by having two players in the same game via Steam’s matchmaking service.  This is an item that’s been in the works for a while, with bits and pieces being done.   This month I was finally able to put it all together.  It’s based on Steam’s P2P network layer, so it should be able to deal with routers and related issues without having to open up specific ports.  The goal is to replace this with a full Server/Client implementation at some point during Early Access.

I got a question last update about female characters in Deadburg.  The work done on specing the models was done with female models in mind.  I’m not sure if all of the final animations/models for female characters will be done at the same time as male characters, but it’s something I’m working to include.  The closed test may not have a female model initially for example.  Here’s a shot of the female test model.  Again none of the current models/animations are final. 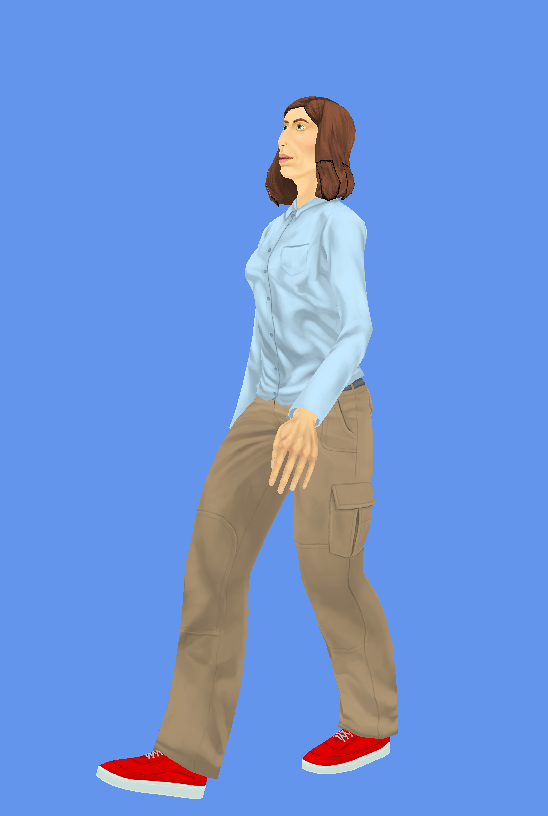 So I’ve mentioned this in the past, but wanted to circle back now that it’s implemented in the game and working.  Basically if the game crashes you should see a pop-up like below.  This will give you the option to send us information about the error.  It also includes some basic information about your system, like your CPU, GPU, RAM, and OS information.  It does not send any personal information or information that could be used to identify you or your PC.  You do not need to send this information if you don’t want to, you can simply exit out of the reporter.  The process of sending the information does not require your e-mail or any account.

There are two “big” items in the way of the closed tests starting.  The first is getting all of the test animations in for the player character.  I know the Mixamo folks are working on the issue, but they haven’t provided a specific ETA.  The other issue is that there’s a good chance I’ll be moving here shortly, and if so I’ll probably want to get that done before starting testing.  So I don’t have to go dark for a few weeks during the move.  My goal is that the September update is announcing a date for the start of closed testing.

The closed test will be mostly open to any current fans of Deadburg.  There will be information here along with the various social media accounts.  And if you joined the mailing list you’ll get an update there.  It will be a closed test in that you will need a code from me to join, but as stated, everyone who wants one should get one.

I’ve been asked about the requirements for the closed test.  I’ve not finalized them at this point, but generally it should be fairly simple.

Sorry for the late update on July.  I’ve been working on two related items.  The first is getting some kind of player model into the game so that it can be tested.  The Xbox Avatars are gone, so they need to be replaced.  I’ll discuss that process a little bit, and where I’m at currently.  The second part is working on a spec for the next big art item, which is animations.

The work to replace the avatars is probably the largest part of the PC port, at least in terms of getting to a testable version.  The avatars offered a ton of customization, and while we won’t be able to match that with the Deadburg models, the aim is to enable as much of that as I can.  Right now I’ve got an early version of the characters animating using some stock animations.  This took a lot longer than I would have liked, but it should allow me to move forward with a test version a lot faster than if I had to wait for custom animations to be done.  I’ve also got the mesh recoloring working so we aren’t all running around with the same character for the test builds.  Here’s a shot of the test app I’ve been using to get the animations working. 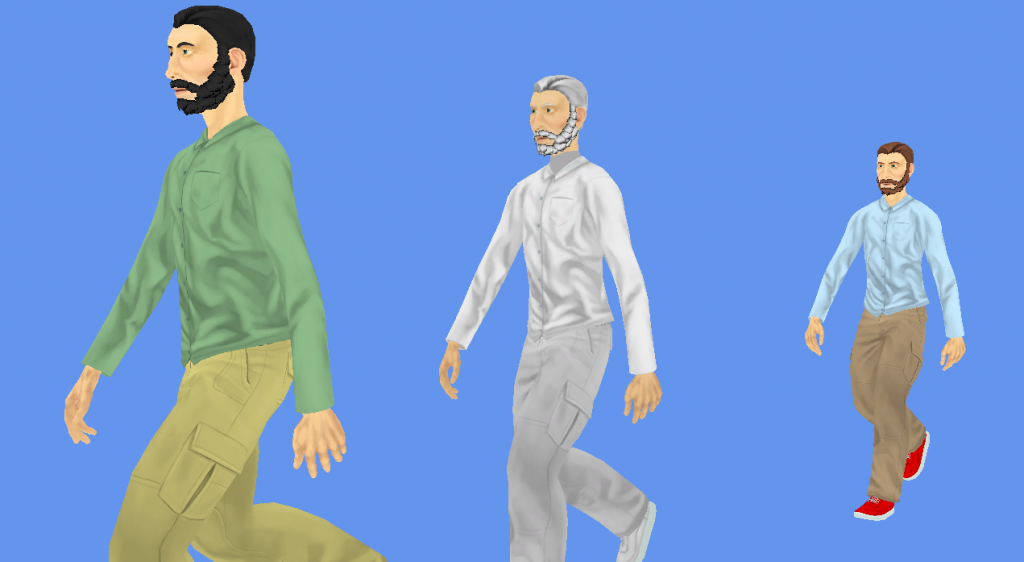 The current character has 8 parts that can be swapped in/out and colored; head, hair, facial hair, chest, arms, hands, legs and feet.  This should allow us to have clothing that you can either customize pre-game or find in game (Depending on how much there is, and if clothing affects game play).  Note the current art is not final.

The models are animating/coloring in my test application.  Right now I’m working on getting these into the game, which is one of the last big things I need to finish before I can open up the testing.

One of the more lackluster parts of the original Xbox release was the lack of first person animations.  Mostly this was an issue of the avatar models being difficult to animate, you needed specific versions of software that weren’t in use anymore.  In the PC version we’re going to have real animations in first person view.  A good chunk of this month was figuring out the spec for those animations.  This is always time consuming as I usually have to figure out how to use new pieces of software.  The goal is at the end I can go out to artists and give very specific details on the art I need and how it needs to be produced.  If I do this right then the art can be dropped into the game fairly easily.  If I do it wrong then the art might not work right, and in some cases must be discarded.

Here’s some programmer art showing the key features.  Basically we’ve brought back the separate parts from the full character model.  They’re just put onto a different animation rig for first person animations.  So the animations will be done for each weapon/item, and then the character arms/hands will fit into those animations.  It means I’ll be able to support all of the clothing options of the full character without filling memory up with separate models/textures for the first person assets.  In this case we’re swapping between different arm geometry/textures and different hand geometry/textures. 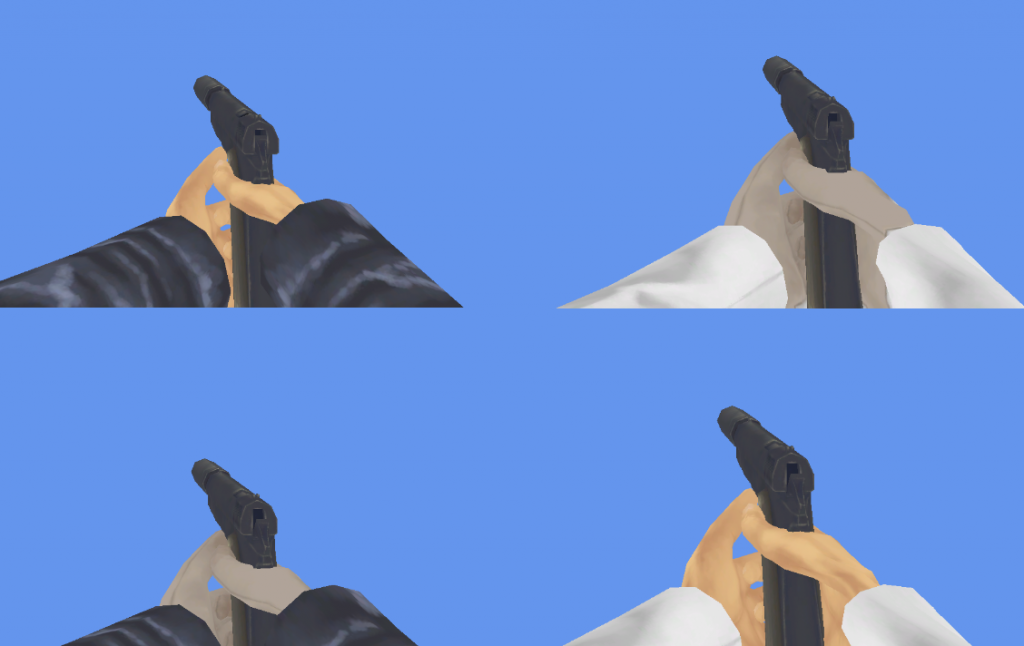 The spec work is basically complete and I should be able to begin the work of finding an animator to work with soon.

We’re getting closer to having a test version ready.  I’ve still got to get the character models into the game using the stock animations.  The first person animations will not be ready for the test version, but the old Xbox versions will be in.  Once the characters are in there’s probably a few weeks of fixing bugs/issues before we can do a test version.  Right now I’m targeting mid/late September for testing.

I’ll be looking to contract out some work on the 3rd and 1st person animations.  If you’re someone who would be interested in the work send me a link to your portfolio.  You’ll need to have experience using Blender for rigging and animation.  You can reach me at jeff@reanimatedgames.com.