So what’s been happening in January for the PC version?

So the new render system I showed off last update had some bugs.  And normally I’ll punt that kind of stuff till the end, but I didn’t want them hanging over my head, so I decided to address them right away.  That took a lot longer than I thought it would.  But I can say most of the issues are resolved now.  There’s still 1 or 2 big issues that I don’t have a good solution for, but I think the current version could go into Early Access.

The other item that I just started on last week was the prep/speccing out of the player character for the PC version.  Since the game will be releasing on Steam we won’t have access to the Xbox Live Avatars for player characters.  That means we’ll need something new.  The first step is specifying  exactly what I want that character to be before I hand that off to Liam to generate the actual model.  The spec stuff was finalized this week and he’s begun work.  It’ll probably be the March update before you see the result, since after he’s done I still need to get the model animated and rigged.

That’s it!  Not a great month, although the holiday did cut into it a fair amount, and I’m glad to have most of the render bugs fixed now, when the whole system is fresh in my head, as later it would have taken a lot longer.  Given that not a whole lot here is stuff you can see, here’s a teaser pick of some of the new weapons. 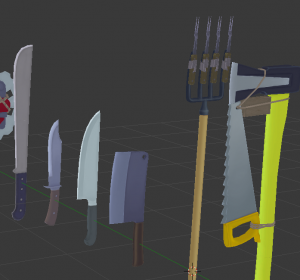