Sorry about the missed updates, let me catch you up on where we are now.

So the Feb update mentioned a UI system that would help me build out the keyboard/mouse UI for the PC version.  There was actually a lot more work to do on that system since that update.  It’s a fairly normal occurrence in development that as you use something for a real product you can find the issues with the original design.

That said, after a good deal of work most of the UI has been replaced, and a fully mouse/keyboard native UI is in game now.  There are a few things I’m still working on, like the player HUD.  But the big pieces, like the inventory and menus are done.  There’s still more work to do on the look of the UI, especially in regards to graphics, but the bones are in.  This means that the game’s UI is basically ready for a beta test.

The big change you’ll see is the new inventory is a single screen, instead of multiple panels that you scroll through.  This is something I can do now that I can use tool tip style popups instead of having to render item information on the screen.  I can also scale the UI elements a little different to fit more stuff.  Here’s a shot of the current state. 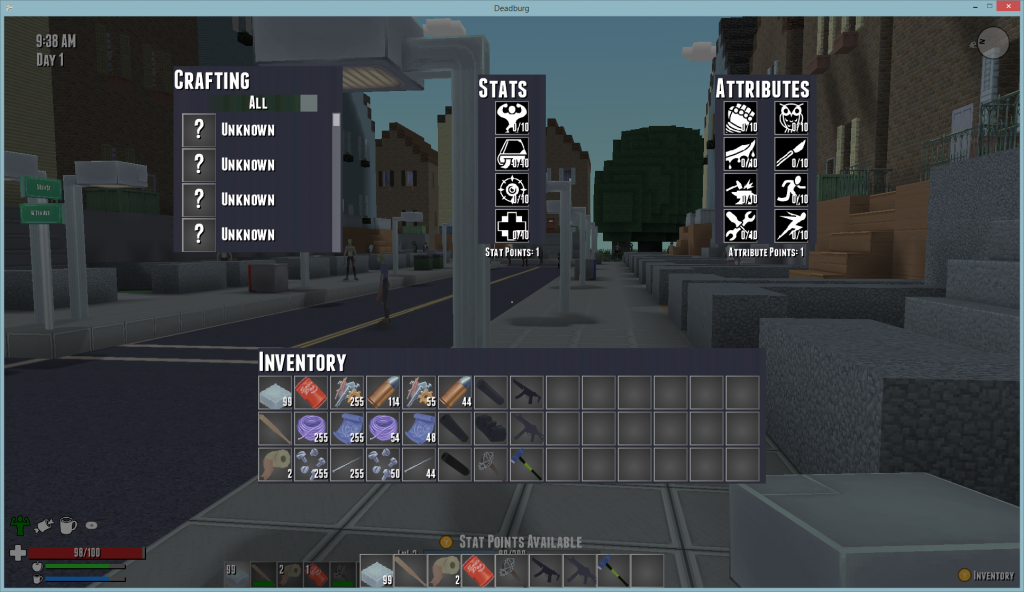 So the Xbox version of Deadburg was built on top of the Xbox Live service/technology.  On the code side this is done via “GamerServices”.  This works great on the Xbox 360, but it doesn’t function at all on the PC since Microsoft closed down the Games for Windows Live program.  In fact you can’t even run a game using GamerServices on a PC unless it has the XNA dev install.  This means it had to go.

The replacement for Deadburg will be Steam.  It gives most of the functionality of the Xbox Live system, and allows me to basically drop it in without reworking too much.  There’s still a lot of work to get the Steam stuff running at 100%, but as of last week I’ve been able to fully remove the GamerServices Xbox Live stuff.  This means the game could actually be shared/tested by people not using a development install of XNA.  It’s another step towards getting the game into your hands for testing.

If you played the game on Xbox 360 there’s a good chance you saw a blue screen at one point or another.  This happened if the game crashed for some reason.  Some of you were kind enough to send me pictures of these screens which I could then use to try to fix the issues which caused them.  Unfortunately there wasn’t an automated system for sending that information to me, so there’s a good chance I missed out on seeing all of the crashes.

Now that I’m working on the PC version I can do something about that.  I’ve put together a fairly simple crash reporting system that Deadburg will be using.  If a crash occurs you’ll get a pop up that will allow you to send data about the crash directly to me.  No e-mails/pictures required.  I can then see what crashes people are hitting, how often they’re hitting them, and hopefully respond to crashes much more quickly.

In order to start the closed beta test of Deadburg, which I’m hoping you all will participate in, I’ll need to get the game onto Steam officially.  Right now I’m using what amounts to a special test game that Valve created for developers to use.  It won’t really work for doing a larger test.

The question is to do Steam Greenlight, or wait until Steam Direct, it’s replacement, is made available by Valve.  The issue with Greenlight is that it requires more polish on the visuals/display side of things, since you’re asking random people to vote for your game.  I don’t think Deadburg is in a great position to do a trailer/promo reel at this time, so I haven’t put it onto Greenlight as of yet.  There’s still visual polish to do and some major things like first person animations are still missing.  That said as I’m getting closer to having a testable build then it’s something I may need to address if Steam Direct isn’t out by then.

That’s all for this update, thanks for reading and I’ll post more at the end of June!

5 thoughts on “Deadburg PC Update – May”